Before today’s fashion, before Christian Dior or even Coco Chanel, there was the one and only Marie Antoinette. The queen of France always loved to dress. She mesmerized all of Europe with her style, charm, and love for partying. Despite her tragic destiny, her name is celebrated for representing fine french taste. She was not one to create but she was one to select the most talented designers, to wear the most sophisticated and artistic clothing. She had an eye for beauty, and recognized fashionable art when she saw it. 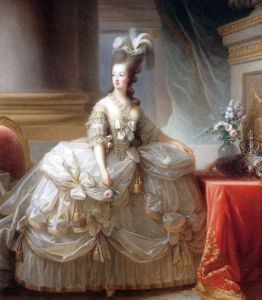 Back in the 18th century, women used what is now the ancestry of the corset, a « Corps », which was so tight that it provoked stomach aches or even fainting. It was the starting piece of every dress. The first dresses that Marie Antoinette was wearing were, evidently, les Robes à La Française, very famous in the time of Louis XVII. The 19-year-old Rose Bertin becomes the go-to designer of the Queen. The royal spending on clothing start to increase every year, with every piece being fancier and more innovative than the previous one. 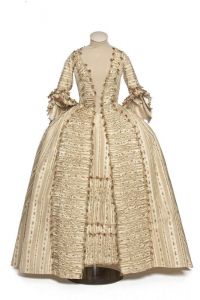 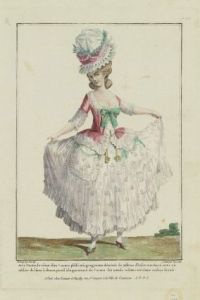 Shorter than the Robe à la Francaise was the Robe Polonaise (with is name referring to the political news of the century in Poland, Germany, Russia and Holland), which was made famous by the Queen herself. The gown looks as if two dresses were superimposed. It is more practical for the daily life since its length stops at the ankles. The Robe Polonaise is singularized by its rolledup tail. 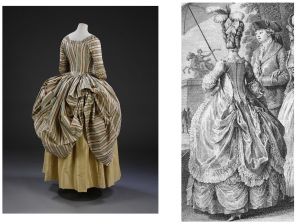 However, the most comfortable and simple dresses at the time were the Robes à L’Anglaise ( inspired from England). With a corset that’s less tight and with less voluminous baskets, the Robe à L’Anglaise is also adapted for horse riding. 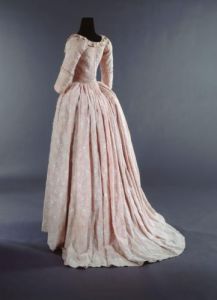 The hair was dyed white, and needed a certain « puff » that curled it, automatically adding more volume to the hairstyle. It was also possible to add butterflies, flowers, feathers, jewelry and more to the hairstyle itself. Gigantic, isn’t it? The hair was designed to represent a certain theme, evoking animals, landscapes or scenes from the Opera. During the 18th century, fashion always kept track of actuality and news, and with that got inspired for more hairstyles or gowns. 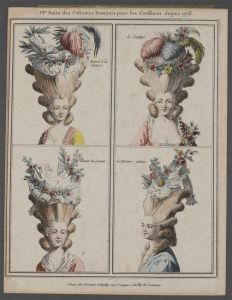 However, after her first pregnancy, Marie Antoinette chooses more simple hairstyles like a flat bun.

The Queen of France (and Fashion) loves jewelry, and always wants new creations. She would wear the Grand Sancy, a diamond found in India during the 15th century. She used to spend enormous amounts of money on everything fashion related, and even sold some of her own jewelry at some point, to obtain an even more expensive bracelet. This capricious personality trait either in luxury purchases or in her relations with others gets criticized and created scandals.

A necklace of 650 diamonds, weighing 2 800 carats was stolen by an impostor claiming to be a relation to the Queen. This scandal made headlines of the Court of Louis VXII and worsened the Queen’s image. The novel The Queen’s Necklace by Alexander Dumas was based on this controversy. 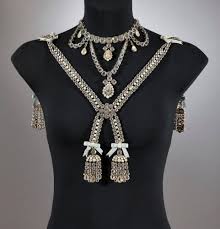 During that period of time, the aristocrat face is white. In order to cover their faces like we do now with actual makeup, women used lead monoxide, which was particularly damaging. However, when mixed with formulas containing lemon, nenuphar, lilies and more, the results were far better. That way, the color Red was born and used particularly for the cheeks. Despite that fact, Marie Antoinette was one to promote being natural. She took great care of her skin using lotions, vinegar, pigeon water, angel water and so on. Jean-Louis Fargeon, her perfumer, created for her products based on vegetable essences as well. She likes the smells of lavenders, jasmines, roses, but most importantly violets.

Her interest for Architecture & Design.

Marie Antoinette created an entire aesthetic and style. It wasn’t only in the dresses she wore or the parties she hosted, it was everywhere. From her love for flowery paintings, to the royal and interior design of every room in her private apartments in the castles of Versailles and Trianon, without forgetting the luxurious and exceptional furniture, chinese boxes, fancy tea sets, and enormous gardens. In the Chateau de Versailles, a theatre was even designed for her and for her love of acting. 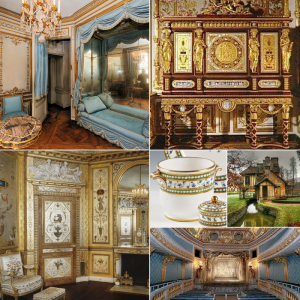 Marie Antoinette is admired up until today and remains a big source of inspiration for all artists out there. Designers create dresses and gowns following her style,

Marie Antoinette was indeed the Queen of France, but she is also remembered for being one of the greatest Queens of Fashion there ever was. This post is in honor for her taste and royal style, so royal that to her poverty didn’t exist. After all, she is the one to have supposedly had the bright idea to.. Let them* eat cake!

*french population during Marie Antoinette’s time who were so poor that they manifested and complained because they had no bread to eat.