Earlier this month, Vogue and the Metropolitan Museum of Art Costume Institute announced the theme of Met Gala for 2019; “Camp: Notes on Fashion”. The theme was significantly inspired by Susan Sontag’s essay, Notes on “Camp”. The Met will be Co-Chaired by Lady Gaga, Harry Styles (Read it now: The best suits Harry Styles has worn on tour!) , and Serena Williams and will be underwritten by Alessandro Michele, CD of Gucci since his work has a very strong and a prominent hint of Camp. What exactly is “Camp”? How did it originate? And what does the theme mean for the Met Gala and the public eye?

What does it mean?

Camp cannot be described or summarized in a sentence. It is an aesthetic and a sensibility with multiple dimensions and complexities. People often can mistake Camp for kitsch, however not all kitsch is camp and not all camp is kitsch. Camp can be described as irony, exaggeration, ugliness, and extravagance. It’s flamboyant, it’s style without content, it’s self-conscious objects (e.g. Off-White “For Walking boots). According to Susan’s essay, it’s “Love of the unnatural: of artifice and exaggeration”. Camp isn’t only fashion as it can also be found in forms of music, furniture, films, etc. Many sorts of camp exist: the queer camp, pop camp, film camp, high camp, art camp, and even political camp, as Donald Trump can fall under the category of camp himself.

Camp was extremely popular in the 60’s and the 80’s. It was widely adopted by queer underground movements (as seen in Paris is Burning). Camp has currently been making a comeback on the runway. It was also seen as a  street style. Multiple designers look at camp for inspiration, while hypebeasts are popularizing camp items (Ugly Sneakers).

In the current chaos of fast trends, Camp is an appropriate theme for the Met since it has the power to express the irony and ugliness of the fashion industry’s current situation.

Andrew Bolton, head curator of the MoMa Costume Institute, says it can be traced back to the French Court under Louis XIV, as early as the 1600’s. (Read now: Marie Antoinette, or the Queen of Fashion). The French Court under Louis XIV was extremely based on pose and performance. Louis XIV made French Nobility gather at Versailles. He forced an extravagant dress code upon his kingdom. This has caused for the French to use their earnings to purchase flamboyant garments.

The word “Camp” itself can be traced back to the 1900’s where “Camp” was a code for men whose style and behavior were viewed as theatrical and flamboyant, as well as marginalized for having an effeminate quality.

Susan Sontag’s essay, published in 1946 played a major role in choosing 2019’s theme for the Met Gala. Susan was able to understand the complexities of the Camp theme. She managed to explain it in her essay, Notes on “Camp”.

The essay explores the multiple dimensions of Camp and explains its intensity; if you wish to deeply grasp the definition of Camp, these points (mentioned in the essay) are essential to understand:

– The ultimate Camp statement: It’s good because it’s awful… Of course, it is not always the case. Only under certain conditions, those which Susan has tried to sketch in these notes.

– “When something is just bad (rather than Camp), it’s often because it is too mediocre in its ambition. The artist hasn’t attempted to do anything really outlandish. (“It’s too much,” “It’s too fantastic,” “It’s not to be believed,” are standard phrases of Camp enthusiasm.)”

– “Camp taste is, above all, a mode of enjoyment, of appreciation – not judgment. Camp is generous. It wants to enjoy. It only seems like malice, cynicism.” 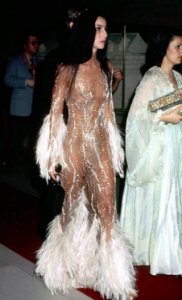 This is the essay designers will look and read to find inspiration in order to design according to the theme. Here’s the link to the full essay: https://faculty.georgetown.edu/irvinem/theory/Sontag-NotesOnCamp-1964.html

What does this mean for the Met Gala and the Public Eye?

This is the broadest theme for the Met Gala yet, as mentioned before Camp can be found anywhere and everywhere and is not limited to just fashion. Designer may find inspirations in films, postcards, and even productions. Camp in its nature is very theatrical, thus it will be an exciting red carpet that (hopefully) will be theatrical, extravagant, flamboyant, and creative. It is expected to be the most creative one yet as it’s supposed to be ugly and ironic. It will be interesting to see where designers will find their inspirations and how they interpret Camp. Multiple designers include Camp in their runway shows such as Gucci, Prada, Schiaparelli, Thom Browne, Moschino, and many others, but how are they going to elevate, and custom create extravagant gowns that will add up to their brand image is the question that many critics are waiting to see.

One of the influences and the power of the Met Gala is that it provides the public with a general knowledge of fashion inspirations that are found outside of the industry such as the Catholic Church and Technology. It introduces designers to new concepts and inspirations and pushes them to think outside of the box while remaining within the frame of their aesthetic. Camp, as an aesthetic, is reemerging as trend, but as a concept is not as known to the public. The Met will help the public in identifying their current style and be able to comprehend it on a deeper level, as well as identify Camp in multiple objects beyond the red carpet. This theme will serve as an open book to the public in gaining knowledge about fashion and its significance. 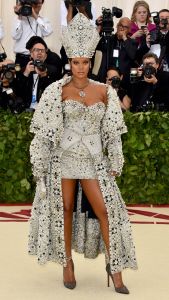 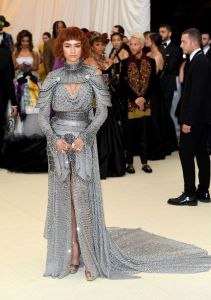 The Artémis Team would like to thank this project’s creator, Marah A.