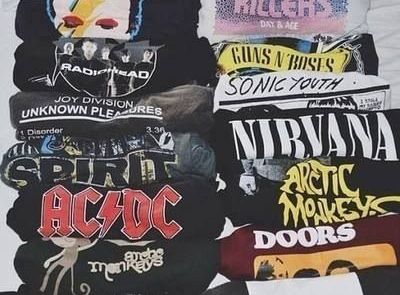 The Intertwined World of Music and Fashion: A Perspective Piece by Liz Lavender.

It is common knowledge that our teen years are the most formative.  We all understand the exhilarating feeling of turning 13 and being able to use the word “teen” as a self describing adjective rather than a noun.  The teen years bring about a lot of change; We begin to sculpt ourselves from awkward and ignorant, to beautiful displays of adulthood. Much of our personality is shaped by our individual style.  Each person finds inspiration in various different things. Some people are inspired to dress like their favorite model or Instagram celebrity; Some people are inspired to dress like a TV show character; Some people are inspired by the monotonous routine of life; Some people are inspired by music.  I would fall under the category of “people who are insanely obsessed with music that they plan each outfit according to the song of that day.” I am aware that this is a mouthful of a category, but is nevertheless an important factor in shaping everyday fashion choices.

As I approached the ripe age of 18, I began to discover a side of music that completely shifted my perspective.  My brother and I were driving through our hometown. It was the quintessential summer evening. The sky was pink and the air was muggy with a slight breeze.  All of the windows were down and we were cascading down Route 1. My brother plugged in the aux and began playing a song. It was alien to me, but I instantaneously felt connected.  This song was “Take It Easy”, released in 1972 by Soft Rock group [the] ‘Eagles’. I went home that night and listened to almost their entire discography. The next night I watched their 3-hour documentary.  I researched every minute detail of the band.

The Eagles introduced me to a wide array of music; I discovered Fleetwood Mac, The Byrds, The Rolling Stones, Blondie, Linda Ronstadt, The Allman Brothers Band, and many other incredible artists from the 1960’s and 1970’s.  I also fell in love with the 1970’s; This time period offered a tranquility that is met with some of the greatest fashion risks. (Read it now: Fashion in the 70’s)

As I matured and my life began to revolve around this time period, I found my fashion choices beginning to change.  I began to dress based on the music I was listening to. Oftentimes, I found myself choosing a song to define my day and creating an outfit based on the chosen song.  For example, the song “Gypsy” by Fleetwood Mac offers a haunting and sensual vocal that tells a nomadic story. This song repeatedly prompts me to throw on a midi dark silk slip dress with an army green turtleneck underneath paired with black chunky heeled boots.  Stevie Nicks, lead singer of Fleetwood Mac, is notorious for her dark and witch-like ensembles.

This reaction to music has become instinctive.  I used to spend hours choosing outfits. Now, the process has become effortless; I go to my favorite, 300-song playlist, press shuffle and let the first song choose my outfit.  I will never understand the way music impacts the human mind. It is mind boggling that a song can cause me to choose an outfit. That concept sounds juvenile, but it goes deeper.  Music has the power to control my mind and choices. I have discovered that it is often easy to tell a person’s music taste based on their fashion choices. After describing my music taste to a novice person, I always conclude with, “I look like my music taste”, to which the person replies, “You 100% do.”  There are certainly phenomenons in life that are mysterious and I believe that the psychological effect of music on fashion choices is truly enigmatic.

The following list contains the songs that have the largest impact on my fashion sense:

Harry Styles: Woman, Only Angel. (Check it out now: The best suits Harry Styles has worn on tour!)